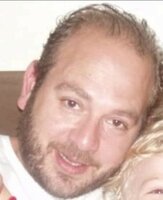 James “Jamie” M. Grissom, 52, of Egg Harbor Township, N.J., along with his beloved dog, Cash “Money” passed away suddenly, on September 3, 2021. Born in Somers Point, Jamie was a resident of E.H.T. off and on for most of his life. Jamie was the 1st class to attend all 4 years and graduate from E.H.T. High School in 1987 and was President for part of his Senior Year. He participated in Varsity Soccer for 4 years, Track for 2 years as well as Baseball and Tennis for 1 year. He went on to ACC in ’87- ‘88 followed by attending Stockton University where he majored in Finance with a minor in Accounting and graduated in 1992. Jamie’s passion as a young adult was playing soccer until a knee injury cut his dreams short of becoming a professional athlete. He was part of Team U.S.A. where he traveled all over the world, including the summer of 1986 where he visited Czechoslovak Socialist Republic (CSSR), Hungary and West Germany. He was featured in endless newspaper articles for his record-breaking performances and was recently nominated to be inducted into the E.H.T. High School Athletic Hall of Fame Association. Jamie served as a flight attendant for Spirit Airlines. Jamie worked for several years, and made many friends, in the bar and restaurant business in the Wildwood, N.J. area, including Two Mile Landing, Beach Creek and Urie’s. His most recent years working in the business were spent at the former Christie’s Bar & Restaurant and Tilton Inn in E.H.T. Jamie loved to talk about the BEST accomplishment he achieved in his life which was having his son, Colin James, in 2006. Jamie enjoyed spending his time with Colin who he truly felt was an “awesome son”, whether they were listening to Grunge music from the 90s during their drives to the shore, attending sporting events, relaxing on the beach and visiting many friends. Jamie is preceded in death by his mother, Valerie Ann Florence Grissom Esposito (nee Atkinson), stepfather, Louis G. Esposito, father, Charles Boyd Grissom, stepmother, Jane Arndt Grissom and nephew, Nickolas Marvel. He is survived by his only son, Colin James Grissom, his sisters, Debra Ann Gould (Steven) and Donnah Marvel, his 3 stepsisters, Lisa Williams (Mark), Suzie Hess and Mary Brune (Michael), his nephews, Bryan and Mark Gould and niece, Dana Marvel, great nephew, Brock and great niece, Mayzie, as well as an extensive number of friends that were like family. Relatives and friends are invited to attend the visitation at Ingersoll-Greenwood Funeral Home located on the corner of 12th & Central Avenues at 1201 Central Ave, North Wildwood, N.J.; 08260 on Monday, September 13, 2021 from 10am – 10:45am directly followed by a memorial service at 11am. In lieu of flowers, Jamie’s family requests that anyone who wishes to honor Jamie, may make donations to his son, Colin. Donations may be sent to Wells Fargo Bank, c/o Colin Grissom, 2349 Street Road, Bensalem, PA; 19020. A GoFundMe page has also been created: Colin J. Savings Fund in Memory of Jamie Grissom.