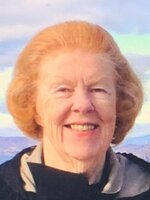 It is with great sadness that we announce the passing of Kathleen "Kate" Weis, 89, of Wildwood Crest, on Sunday, April 24, 2022. She was born in Wildwood in 1933 to Helen and William Callahan. Kate went away for high school, attending Eden Hall in Torresdale,PA. After high school Kate traveled with friends to Europe by boat. The journey across the Atlantic took five days. Interested in Irish literature, Kate’s father arranged for her to spend a summer in Ireland. For her undergraduate degree, Kate attended ManhattanvilleCollege. After college, she got a job proofreading for Time Magazine in New York City. While working toward a master’s degree in English Literature at Columbia University, Kate contributed to the first edition of The Columbia-Viking Desk Encyclopedia. It wasalso while attending Columbia that Kate met Jack, her future husband. They married in September of 1958 in Wildwood, NJ, and stayed married for 62 years until Jack’s passing in July 2020. Settling into her new role as a parent, eventually of three boys andtwo girls, Kate became an active participant in her children’s lives. Whether it was dance class or horseback riding lessons, Kate supported all her children’s interests. She could be found at countless soccer matches and track meets, and she served as PTApresident. Kate continued to be found at soccer fields for grandson Gavin’s games. Kate’s children and their friends learned that they could count on her for perfect candied apples every Halloween, as well as for dependable transportation to concerts in Philadelphiaand occasionally New York. Even into their adulthood, Kate made sure that Easter candy, St. Patrick’s Day Irish potatoes, and Christmas cookies arrived on time to wherever her children were living. In the mid 1970s Kate helped manage the family-owned The CatalinaMotel in Wildwood Crest with help from everybody in the family. For close to 25 years she worked in the office of the Bristol Plaza Motel. Whenever family members and friends came to the area, she proudly housed them at the Bristol Plaza, and she continuedto make arrangements for visitors to stay there even after her retirement. A lifelong learner, Kate took college classes in literature and French well into her seventies. She never stopped reading for pleasure and particularly liked the New York Times andthe New Yorker. Kate is survived by her children: Betsy, John, Richard, Katie, and Andrew; her grandchildren: Christine, Julie and Gavin; her brother William, and her nieces and nephews. A funeral mass will be held at St. Ann’s Church in Wildwood, NJ on Monday,May 9. Visitation from 10-11am, followed by an 11am mass. Condolences may be sent to ingersollgreenwoodfh.com