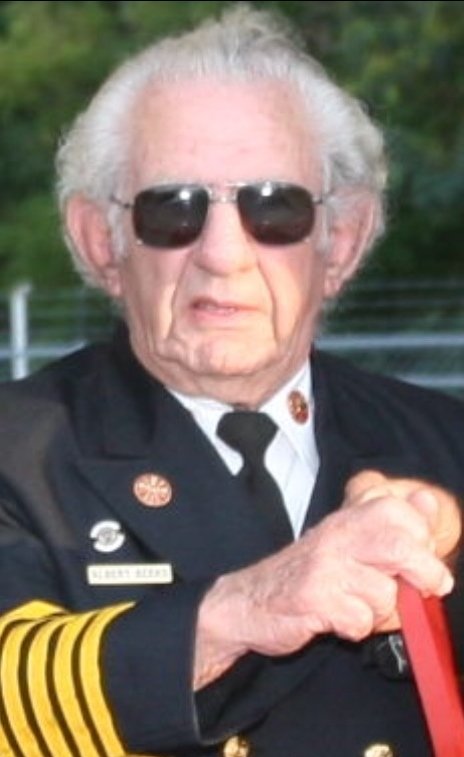 Please share a memory of Albert to include in a keepsake book for family and friends.
View Tribute Book
Albert S. Beers (Al), 92, of Wildwood Crest N.J. passed away Saturday October 17, 2015. Born in North Wildwood, N.J. on August 25, 1923, Al was a life-long resident of Wildwood Crest. Upon graduating from Wildwood High School, Al enlisted in the Army Air Force, where he would attain the rank of Sergeant. During WWII, Albert participated in the Ardennes Germany North France Campaigns as a radio/gunner. For his heroic service, Al was awarded 3 Bronze Stars, 5 Oak Leaf Clusters, and The Airmen’s Medal. Upon return from the war, Al partnered in several business ventures with his life-long friend Harry Stokes. Together, the two friends would build the Ebb Tide Motel, a flower shop, and finally Wildwood Linen Supply, a successful third-generation linen rental company. Albert developed a passion for education and the fire service when he joined The Wildwood Crest Volunteer Fire co. in 1947. Albert is a life-long member holding many positions including Lieutenant, Captain, Assistant Chief, Chief, and Safety Officer. Albert was also the Fire Inspector for Wildwood Crest for many years. Albert went on to become The Cape May County Fire Marshall for over 25 years. During this time, he went back to school and obtained his Bachelor of Science and masters degree in the Fire Sciences. Albert served on many local, state, national, and international committees, always promoting fire safety. He truly enjoyed the comraderie of those in the Fire Service! Albert is pre-deceased by his parents, Walter and Claire (Stilfield) Beers, his wife Linda (Johnson), and his brothers Walter and Jack. He is survived by his daughters Alicemarie (Jim) Lees and Susan (Derek) Garner, his grandchildren, Jasmine Brickhouse, Jordyn Lees, Morgan Garner, and Evan Garner, and his long-time companion Peggy Johnson. Albert is also survived by nieces Linda (Ray) Roche, Maryanne Beers and nephews Johnny (Audrey) Beers, Jack (Sissy) Beers, and Bob (Laurie) Beers and many great nieces and nephews. Visitation will be held at The Wildwood Convention Center on Friday, October 23, from 9:00 to 11:00 A.M. Service and Celebration of Life will be held at 11:00 AM. Internment will immediately follow at the Cold Spring Cemetery. In lieu of flowers, donations can be made in Albert’s name to Wildwood Crest Volunteer Company, 7100 Pacific Avenue, Wildwood Crest, NJ 08260. For condolences please visit www.ingersollgreenwoodfh.com
To send flowers to the family or plant a tree in memory of Albert Beers, please visit Tribute Store

Look inside to read what others have shared
Family and friends are coming together online to create a special keepsake. Every memory left on the online obituary will be automatically included in this book.
View Tribute Book
Services for Albert Beers
There are no events scheduled. You can still show your support by sending flowers directly to the family, or planting a memorial tree in memory of Albert Beers.
Visit the Tribute Store

Share Your Memory of
Albert
Upload Your Memory View All Memories
Be the first to upload a memory!
Share A Memory
Send Flowers
Plant a Tree