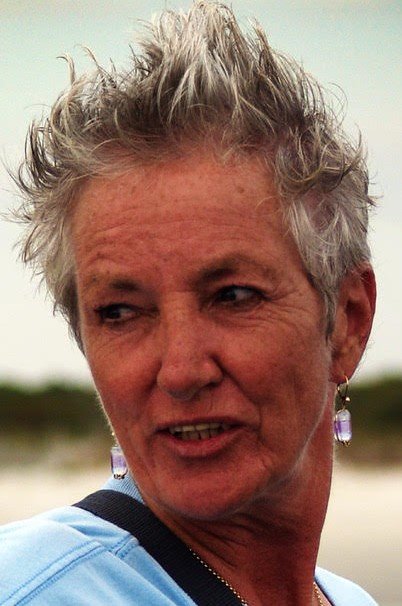 Please share a memory of Joan to include in a keepsake book for family and friends.
View Tribute Book
Joan Diane Dean, of Cape May, passed away at age 74 on March 2, 2021 in Atlantic City surrounded by her loving family following a long battle with Alzheimer’s and breast cancer. Joan was born August 8, 1946 to Elglenn and Arcadia (Johnson) Gerhard. She attended Margaret Mace Elementary School and had spoken often about her childhood, playing along the bay in West Wildwood with her beloved siblings and cousins. Joan graduated from Wildwood High School in 1964 and swiftly joined the work force as a Bell telephone switchboard operator. Married to James Dean in 1968, traveling a bit as a Coast Guard wife, then settling down to have children, Joan definitely wore many hats after this. Joan had an incredibly varied career path throughout her life: She worked as a waitress at the Rocking Chair Restaurant in Avalon, secretary for the Public Defenders Office in Cape May Court House, , she co-owned a bicycle rental business on Sunset Boulevard in West Cape May, drove for High Roller taxi company in Cape May, worked as a real estate agent, and dabbled in retail, before securing an administrative position at Burdette Tomlin Hospital (Cape Regional), in their Public Relations department. This was where she stayed for many years, eventually being promoted to Coordinator of the hospital's then brand new Lifestyle Management department, where she implemented programs to help South Jersey residents lead healthier lives. But that would not be the end! Joan wouldn't stop unless she was forced to, and even upon nearing retirement she was still updating her resume, looking for her next adventure, which she found with the US Fish and Wildlife Service as an Environmental Steward and Educator at the Cape May National Wildlife Refuge. After this, Joan worked for a short time as an event coordinator for the Brigantine Marine Mammal Stranding Center, and then she landed at Florida's Indian River State Park in Barefoot Bay with AmeriCorps. The environment was always something that ignited her passion, and she thoroughly enjoyed educating all who would listen about the importance of protecting and respecting fragile marine ecosystems. Working aside, Joan loved organizing and coordinating family and friend get togethers! From her Thelma and Louise adventure to the midwest with her friends, family reunion barbecues with the Gerhard/Johnson clan to actively staying involved with her high school reunions, it was obvious Joan was deeply devoted to her family and friends over her entire life. In particular, she shared a strong lifelong friendship with her cousin Alana Kutapow, as over the years Joan would say how grateful she was for Alana’s razor sharp memory, as her own began to falter. Joan's interests were boundless. She enjoyed photography and the outdoors, especially walking the beach, collecting shells and other treasures. Joan even entered and finished a kayak race through the Cape May Inlet at 55 years old! She had lifelong sand in her shoes, and she cherished her hometown. In the garden, Joan had quite a green thumb; she could transform a sandy backyard into a fertile garden oasis in no time! Joan also treasured her adopted dog Odie, loved dancing to her favorite music, and as a Grandmother she reveled in being with her grandkids (teaching them all her dance moves)! Joan was the life of the party wherever she went and could find fun anywhere, with anyone. She modeled resiliency, always making the most out of life, and will be missed terribly. Joan was preceded in death by her husband Jim, their infant twin daughters Casey and Kelly, her elder sisters Judy and Joyce, as well as her mother and father, and younger brother Glenn and Odie. She is survived by her three adult children, Matthew (Georgeann), Jennifer (Fred) and Alison (Tom); and her youngest brother Dale. Memories of Nana's laughter and kindness will live in the hearts of her three grandsons Brandon, Nicholas, and Stephen and her two granddaughters, Gabrielle and Imogen. Funeral services will be held at Ingersoll-Greenwood Funeral Home 1201 Central Avenue Wildwood NJ 08260 on Saturday March 13, 2021 at 11am with Pastor Bob Rogish of First Baptist Church of Anglesea officiating. Viewing will be held between 10-11am. An outdoor celebration of Joan’s life is planned for August. Details will be shared through the family. In lieu of flowers, donations can be made to either the Marine Mammal Stranding Center in Brigantine, NJ https://mmsc.org/ways-to-donate or the Friends of Cape May National Wildlife Refuge, 24 Kimbles Beach Rd. Cape May Court House, NJ 08210 (609)7292635. https://friendsofcapemaynationalwildliferefuge.org/ products/cmnwr-donation Condolences may be sent to ingersollgreenwoodfh.com
To send flowers to the family or plant a tree in memory of Joan Dean, please visit Tribute Store
Saturday
13
March