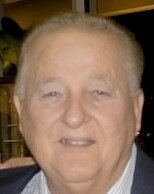 Please share a memory of Robert to include in a keepsake book for family and friends.
View Tribute Book

BELANSEN, ROBERT A. SR. (Bob) 84 - of Cape May, New Jersey died peacefully in his sleep Monday morning surrounded by his loving family throughout the holiday weekend. Known as Bob, Bobby, Big Bob, Big Man, Boss and Senior, Bob grew up in Philadelphia where he graduated from Southeast Catholic High School and was a proud member of the Philadelphia Fire Department. In the late 60’s, Bob moved his family to Cape May County, NJ. During his lifetime, Bob was a tavern owner (Dew Drop Inn), a restaurateur (Miami Beach Inn, Hemingway’s), a renowned local hotelier (Wishing Well, Compass, Hialeah, and Bristol Plaza motels in Wildwood Crest and The Grand Hotel in Cape May), President of the Greater Wildwood Hotel Motel Association, President of the Villas Fishing Club, and a world-class, tournament-winning fisherman aboard his boat “Beast”. Most of all, Bob was truly a friend to all. Surviving Bob are his sons Robert Jr and John; loving and dedicated wife Vera; grandchildren Robert III, Thomas, John II and Julia, three nieces and nephews, and seven great nieces and nephews. Robert was predeceased by his father Michael Sr., his beloved mother Edna, his sister Dorothy and brother Michael.  A viewing will be held on Friday, December 30th, 2022 at 10:00am, followed by a Catholic Mass at 11:00am at the Church of the Assumption, 7110 Seaview Avenue, Wildwood Crest. Arrangements by Ingersoll-Greenwood funeral hom

To send flowers to the family or plant a tree in memory of Robert Belansen, please visit Tribute Store
Friday
30
December

Share Your Memory of
Robert
Upload Your Memory View All Memories
Be the first to upload a memory!
Share A Memory
Send Flowers
Plant a Tree